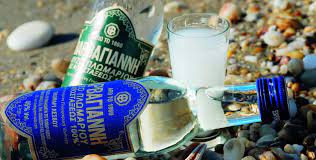 Ouzo is a well-known aperitif from Greece and a staple in every Greek household. It’s known for its clear, silky licorice flavour which pairs well with many appetizers.

Nicholas Katsaros and his family opened up the first ouzo distillery in Tyrnavos, 1856. The first ouzo to be made was named Tinarvou and is still considered one of the best. Although ouzo itself hasn’t been around far too long its base recipe has. Ouzo starts off like Tsipouro a famous Greek spirit, basically the Greek version of Italy’s grappa. The base consists of all the remnants of winemaking also known as must. From there the addition of anise, for that distinctive black licorice flavour along with other spices are added. To name a few, some ouzos may also include cardamom, cinnamon, coriander, fennel, clove, mint and mastic.

The anise seed is also known as aniseed is however the star ingredient in ouzo. These seeds come from the Pimpinella anisum plant, native to the Eastern Mediterranean region. The seeds are small and brownish-gray in colou

Ouzo-Greek-Spirit-Toronto-Select-Bakeryr with a slight curve to them. They can be used whole or grounded into powder, essential oils and extracts are also available. The anise seed not only offers its sweet licorice aroma to baked goods or drinks but also provides many health benefits. The seeds are rich in nutrients and can be used as a natural remedy for a variety of ailments as well.

Ouzo is completely authentic, in fact the Greek government has ruled it can only be made in Greece and therefore it has two designations. One is a PDO (Protected Designation of Origin) and the other is a PGI (Protected Geographical Indication) along with EU-approval. This means the customer will always be guaranteed the highest of quality and the product itself will meet all applicable standards.

Ouzo is customarily served neat in a tall thin glass, or if you’d prefer a slightly less potent option you could also add ice water to dilute it. Adding the ice-cold water also makes the ouzo turn opaque, known as the “ouzo effect” because of its milky white appearance. Ouzo is extremely popular in Greece, so much so that you will certainly come across an ouzerie, a bar that specializes in many brands of ouzo and serves appetizers known as mezethes. Lesvos is known as the hub of ouzo production accounting for 17 ouzo distilleries and known for some of the best ouzo in Greece. Some brands of ouzo include Kardasi, Babatzim, and Barbayanni to name a few and you can find in the bottle shop at Select Bakery.

Bottom line if you’re looking for something new to try that’s bold and fiery this may just be it. So next time you dine at a Greek restaurant be sure to order an ouzo, better yet pick up a bottle from Select Bakery’s Bottle Shop. While you’re at it, grab some of your favourite Greek cheeses, olives, fresh bread and deli meats and assemble a charcuterie board or mezedaki platter and enjoy!